← more from
Lobster Theremin
Get fresh music recommendations delivered to your inbox every Friday.

Life Can Be Cruel 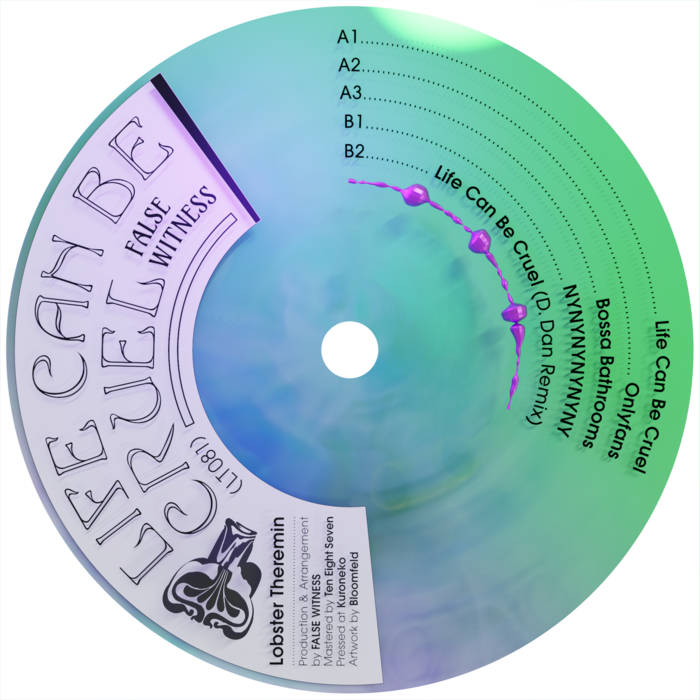 Liam W. music to lose your marbles to

FALSE WITNESS doesn’t care much for escapism. Learning to DJ in their 20’s, the Brooklyn born / Berlin based producer was introduced to Nina Simone and a certain quote would become the foundation of their sonic point-of-view: “an artist’s duty, as far as I’m concerned, is to reflect the times.” Now the artist prepares their Lobster Theremin debut.

A response to the politically charged landscape we find ourselves in, FALSE WITNESSes music very much encapsulates the anxiety, frustration and futility of the contemporary world. Dark, empowering and manic; it isn’t interested in transporting you to a world where problems cease to exist, instead it fixates its sights on maximal - and often industrial - energy that inspires to take to the streets in protest: “a bigots worst nightmare”, as he told Editorial Magazine of his vision for the future earlier this year.

As the founding member of the KUNQ artist collective (home also to RIZZLA and SHYBOI), FALSE WITNESS has shared the stage with Hector Oaks, Matrixxman and and Tzusing - and has teamed up with SHYBOI for collaborative project FALSEBOI - across a variety of iconic venues, such as Tresor, SXSW and Berghain, in addition to significant releases on E-missions, GHE20G0TH1K and a contribution to Allergy Season’s incredible Physically Sick compilation series.

The A1 - ‘Life Can Be Cruel’ - is as blunt as the title would suggest; clashing melodic and industrial rhythms creating a sense of big room, rolling largeness. ‘Onlyfans’ follows closely behind through the pitch-black corridors with maximalist, camp energy that feels like an aggressive ownership taking of outdated, sweeping generalisations relating to sex workers, given the relentlessness of the track and its title.

‘Bossa Bathrooms’ further compliments the hard dance appeal, its red-dot sighted lasers swarming the seemingly infinite black walls as we slip slowly towards maximum overload, while FALSE WITNESSes ode to the city he calls home - ‘NYNYNYNYNYNY’ strays down a lower BPM route, instead focusing on chugging, hypnotising synth-lines and large, controlled noise that sounds like it came straight from the pen of a chaos composer.

Accompanying the record is a digital only track from FALSE WITNESS (‘Terpsichora’, named after a Japanese manga and anime created by Yoshihiro Togashi) and a remix from Berlin based, Mala Junta resident D.Dan, which gives ‘Life Can Be Cruel’ a renewed sense of identity, with its breaksy steps, MSN Messenger-like samples and high velocity euphoria.

Bandcamp Daily  your guide to the world of Bandcamp